Why Have Bankruptcy Filings Gone Down?

27 Jun Why Have Bankruptcy Filings Gone Down? 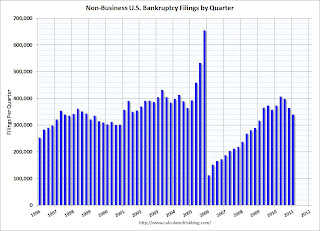 So why are there fewer people filing bankruptcy? Has the economy improved that much? Actually, even if the economy bounced back to its pre-2008 status, there has traditionally been a 6 month or greater delay in the effect on bankruptcy filings.

Some observers say that it is because of the reduction in the high unemployment rates. Others speculate that because credit has been less available in the past few years, fewer people have been able to accumulate enough debt to warrant filing for bankruptcy. Still others say that more consumer credit is available now which is allowing people to borrow and (if only temporarily) avoid the need to file bankruptcy.

I have thought that there were two reasons for the decrease.Mortgage foreclosures are taking much longer than they used to which takes away the urgency to file right away. I also thought that many people just didn’t have enough money to pay for the filing fees, credit counseling fees and attorney fees necessary to file bankruptcy. Now I am not so sure. The person at our local Legal Aid office who is in charge of sending bankruptcy cases to volunteer local lawyers to preparepro-bonopetitions (at no cost)told me that there has been a significant decrease infinancially qualified peoplecoming to her office seeking bankruptcy relief.

Whatever the reason for thedecrease, I don’t believe it will last. A glimpse of the bar chart above shows that while the number of bankruptcies filed in this country sometimes increases and sometimes decreases, it generally steadily increases. (The huge increase and then dramatic decrease in 2005 was a result of Congress passing BAPCPA).

Peter Orville is a bankruptcy lawyer in Binghamton, located in the Southern Tier of New York. He is a member and New York co-chair of the National Association of Consumer Bankruptcy Attorneys.